According to TMZ, the rising country singer took to his YouTube channel earlier this week to share a video, which has since been deleted, asking for help.

“I’ve been quiet a long time now. I want out of this, and I don’t mind people knowing,” the caption on the YouTube clip read. ”They took my grief process, my spirit, my money, my car, my home, and everything possible in order to ‘protect me.’ Well, I need protection from them.”

In the clip, Williams nervously held up white sheets of paper, claiming that his father, Hank Williams Jr., half sister, Holly Williams, and a lawyer placed him into a conservatorship in August 2020, just 55 days after the death of his 27-year-old sister, Katie Williams, who lost her life in a car accident in June of 2020.

“I am under a conservatorship…” the sheets of paper read. ”My father, my half sister and a lawyer placed me in it abruptly in August 2020, 55 days after my sister’s tragic death. I want out.”

TMZ also reported that court documents obtained by the publication show that Williams’ father, Hank, did file a petition for an emergency conservatorship in August 2020 for the singer/songwriter. However, it’s unclear the current status of the conservatorship as the documents are currently sealed in Nashville’s Davidson County Probate Division.

According to Saving Country Music, Williams also shared a series of Tweets on Wednesday (Feb. 2) around 10:13 p.m. The four tweets combined read, “I am in a conservatorship.” He also shared the YouTube video to his Twitter at that time, tagging his famous father.

The “Weatherman” singer also replied to a fan who tweeted about Britney Spears’ conservatorship, which recently made headlines after the Pop superstar faced a very public legal battle with her father, Jamie Spears. The legal battle resulted in Spears’ claiming victory and ultimately ending her conservatorship.

“This is the first February that Britney is has been free of the conservatorship since the day it started 14 years ago on February 1st, 2018,” the fan tweeted, which Williams replied, “It’s my second one not free. :(“ See screenshots of the since-deleted Tweets below. 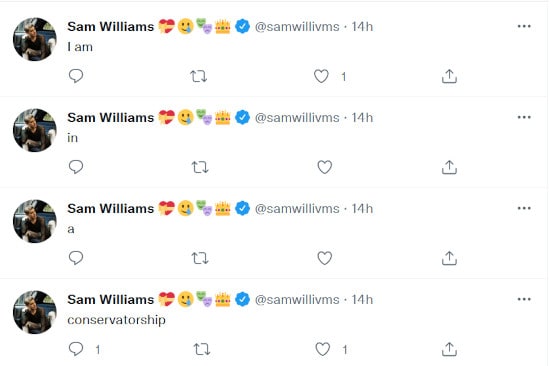 In November 2021, Williams attended his father’s induction into the Country Music Hall Of Fame in Nashville, Tennessee and they were even pictured together on the red carpet.

He also showed his support for his iconic father on the day of his induction to the Hall Of Fame with a gallery of family photos and historic moments throughout Hank Jr’s career.