Following the release of her first acoustic solo album in 2020, singer/songwriter Cassadee Pope is offering fans a taste of new music with the release of her newest single “What The Stars See,” featuring Karen Fairchild and Lindsay Ell.

Since winning Season 3 of The Voice Pope has continued to make a name for herself in the music community. From her No.1 debut album, to earning a GRAMMY nomination, to touring with superstars such as Tim McGraw and Dierks Bentley, Pope is nowhere near done paving her way in the music scene as she gets ready to release even more new music in 2021.

We recently caught up with Pope to talk about her latest single “What The Stars See,” what it was like working with Karen Fairchild and Lindsay Ell, releasing new music and more.

Check out our exclusive Q&A below. 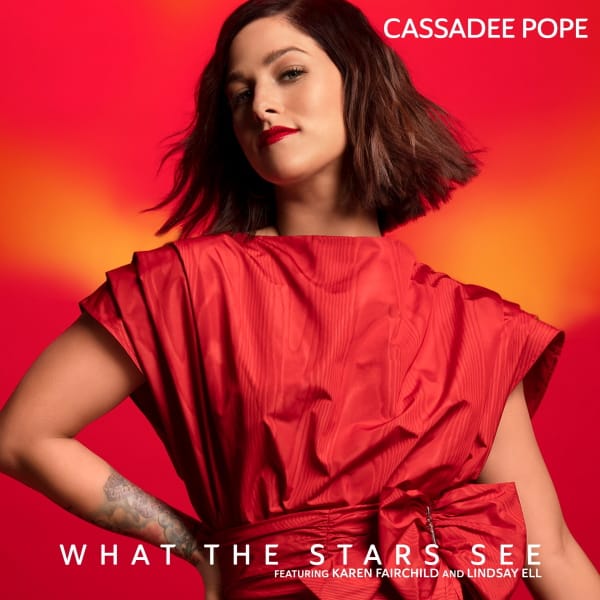 How does working with other successful women in country such as Karen Fairchild and Lindsay Ell inspire you?

Some of my favorite songs ever are collaborations. I think as musicians, creating with people we love and respect is almost intoxicating. I’m a huge fan of Lindsay and Karen so to have them both on a song that means so much to me is really special.

Why did you choose Karen Fairchild and Lindsay Ell for this collaboration?

Karen has been helping me with some additional production ideas for my project and she actually had the idea to make this song a collaboration! She offered to sing on it and I held her to it. She and I have pretty opposite tones to our voices so I knew we’d blend really well together. Since it’s such a guitar heavy song, I just had to ask Lindsay if she’d be a part of it, too, and I’m so honored she said yes. Her guitar playing really sent the song into the stratosphere!

What was your favorite part about working with Karen Fairchild and Lindsay Ell?

I never really get to see either of them in their creating modes. I see them on stage, at dinner, at each other’s houses, etc… but I’ve never been a witness to them creating. So getting to see that was so fun. They’re both so talented and have such great instincts in the studio.

Fans getting their own star is such a unique idea. How did you and your team come up with it?

My team is so creative in thinking up these ideas. We collaborate on a lot of things but this was all Blackbox and Fusion Music Mgmt. Fan engagement is really important to me and giving them opportunities show support in new and different ways is really fun.

I read that your video for “What The Stars See” was inspired by the film Blade Runner. What aspects of the film resonated with your vision for the video?

The director, Ed Pryor, came up with the Blade Runner reference and I was immediately in. That movie was so iconic in its cutting edge fashion and hazy colors. Ed and I talked about taking it a step further with the band performance and really honing in on the frustration the lyrics actually talk about. I wanted the wardrobe to be very vinyl rock and roll leaning with hints of Lara Croft. It all came together so much more impactful than I ever could’ve expected!

“What The Stars See” is your first release since the drop of your last album Rise and Shine. Are you looking forward to releasing more new music in the near future?

Absolutely! Releasing music is an expression for me. It’s the way I can get people to know me better and to provide some sort of comfort for people who need it. I can’t wait for everyone to hear more music from this project. I’ve never been so excited to release music before!

Are there any other collabs that fans can expect to hear soon?

There are definitely ideas of more collabs for more songs but nothing confirmed yet. We’ll see! This project is very inspired by so many bands and artists that I look up to, so getting them to participate would be incredible.

Fans can keep up with Cassadee Pope on Instagram.