Reba McEntire is set to re-release her iconic ’90s album, Rumor Has It, on Friday, September 11 to celebrate the 30th anniversary of the record.

The RIAA triple-platinum certified album features four Top 10 hits, including the title track, “You Lie,” “Fallin’ Out Of Live” and her signature song “Fancy.” In addition, the anniversary edition vinyl will include a bonus track, which is a live acoustic version of “Fancy” that was recorded at The Ryman Auditorium in Nashville. Additionally, CD and digital versions of the re-release will feature a bonus dance remix of “Fancy” by Dave Audé.

“I never imagined I’d get the chance to put out an album for a second time. It’s just so much fun to look back and remember where we were and what we were doing when they were originally released,” shares Reba.

“This album in particular is very special to me because it was the first time I got to record with Tony Brown and he was the reason I finally got to record ‘Fancy.’” the superstar added. “Now, here we are 30 years later and I never end a show without singing that song.”

McEntire’s seventeenth studio album, Rumor Has It peaked at No. 2 on the Billboard Country Album’s Chart and No. 39 on Billboard 200, earning McEntire her first entry into that chart’s Top 40.

Rumor Has It Track Listing:

The album will be re-released on both vinyl and CD along with exclusive merchandise including a mug and a hat. Autographed bundle packages featuring a commemorative lithograph, limited-edition t-shirt and more will also be available. Fans can order the packages at Reba.com. 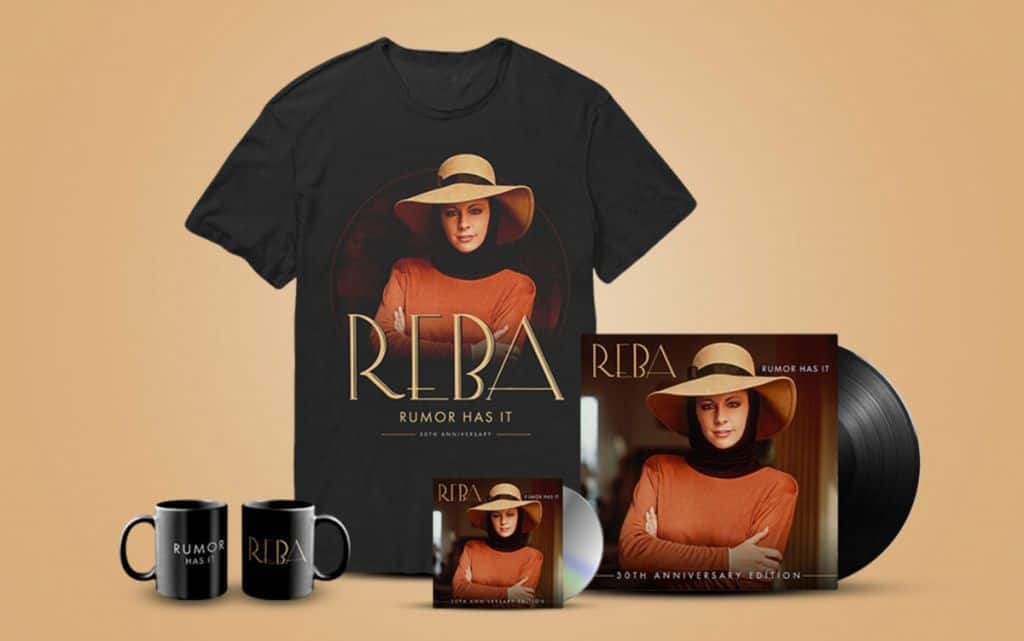 The re-issue of Rumor Has It will be released on September 11 and can be pre-ordered  HERE.

Additionally, McEntire recently re-launched her Reba: Live special exclusively on YouTube, reaching over 100,000 views in just the first three days. Filmed in 1994 at the Omaha Civic Center, the recording showcases Reba’s extraordinary showmanship and includes plenty of iconic costume changes as well as her signature humor. The Oklahoma native’s distinctive talent truly comes to life in the hour-long special that includes twelve unique performances. Fans can watch clips of the special on Reba’s YouTube channel HERE.