Luke Bryan’s wife Caroline Boyer Bryan got her revenge on the country superstar during the latest episode of American Idol when she pulled off an epic prank.

On Monday, March 21, the Best Bad Influence clothing line designer and Brett Boyer Foundation board member went undercover and crashed a performance during the final round of Idol auditions.

While a contestant was singing a Maren Morris song, Caroline entered the set in disguise, wearing a wig, hat and hoodie. She began loudly cleaning the piano which caused the Idol judges to stop the production of the show.

“Thanks, I think it’s clean. Thank you,” a producer said.

As the clip continued, the Idol contestant was in the midst of her performance of Morris’ “My Church,” when Caroline was ruffling a bag of chips causing Lionel Richie, Katy Perry and Luke Bryan to lose focus.

“Hold on, hold on, I don’t want your time to be disrespected,” Perry told the contestant, bringing her audition to a halt.

Perry then took action and left the judges’ panel to grab the bag of chips from Caroline, telling her, “that is enough.”

“Who is that?” Bryan questioned, before Caroline snatched the bag of chips back from Perry.

The “California Gurls” singer then unmasked the mysterious set crasher, unveiling Caroline’s true identity, which had Luke Bryan cracking up. 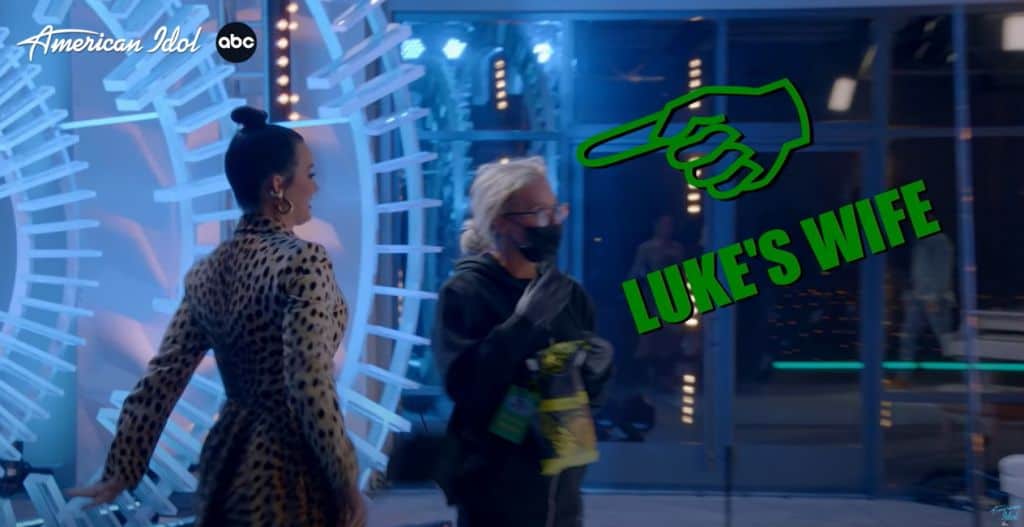 In an unexpected twist of events, it was revealed that Perry was actually involved in setting up the prank on the Idol cast with a fake contestant.

Caroline later appeared and explained that she and Luke have a “history of pranks.”

“We met in college and we just would constantly prank each other,” Caroline shared.

Luke and Caroline often prank each other on Instagram and revealed that Caroline would be appearing on the show on Monday afternoon.

“Y’all remember the time I scared the hell out of Caroline? Just wait till you see her revenge during #americanidol tonight!” Bryan wrote in his Instagram stories ahead of the show, referencing when he caused Caroline to fall off her bike in April of 2020 after he scared her with a loud train horn on his truck.

In the clip shared by Bryan in at the time, Caroline can be seen falling off of her bicycle and tumbling to the ground after the “Up” singer honked his horn at her.

American Idol will return to ABC in early 2023.