We take pride in introducing fans to country music’s brightest new stars through our Country Next series. Here, we chat with Tiera.

Tiera, an emerging R&B/country artist, has always loved singing since she was a little girl. Hailing from Birmingham, Alabama, she began pursuing her musical passions early on in her hometown, performing anywhere she could to get noticed. After committing to one year in college, she decided to drop out and move to Nashville to focus on music full-time.

In 2018, Tiera landed a role on USA Network’s Real Country, where she earned the support of country legend Shania Twain and came out the winner of her episode. Two years later, she accomplished even more milestones, becoming a member of CMT’s Next Women of Country and also signing on as the flagship songwriter for the publishing arm of her songwriting hero, Nicolle Galyon’s female-focused label, Songs & Daughters, created in partnership with  Big Loud Publishing  and  Warner Chappell Music. Along with that, Tiera also launched her own show on Apple Music Country called The Tiera Show, where she introduces listeners to other up-and-coming artists in country music.

Most recently, Tiera celebrated the independent release of her self-titled debut EP. The five-track collection, produced by Cameron Bedell, formally introduces listeners to her authentic sound, which combines both country and R&B influences. Listeners of the project will find song titles like “Found It In You,” “Not Your Girl,” “Laid Back,” “Miles” (feat. Breland), and “Shut It Down” – all of which Tiera had a hand in writing.

Tiera recently caught up with Country Now, who named her an artist to watch in 2021, to discuss her musical journey, current EP, and what’s to come.

Read on to learn more about Tiera in this exclusive Q&A below. 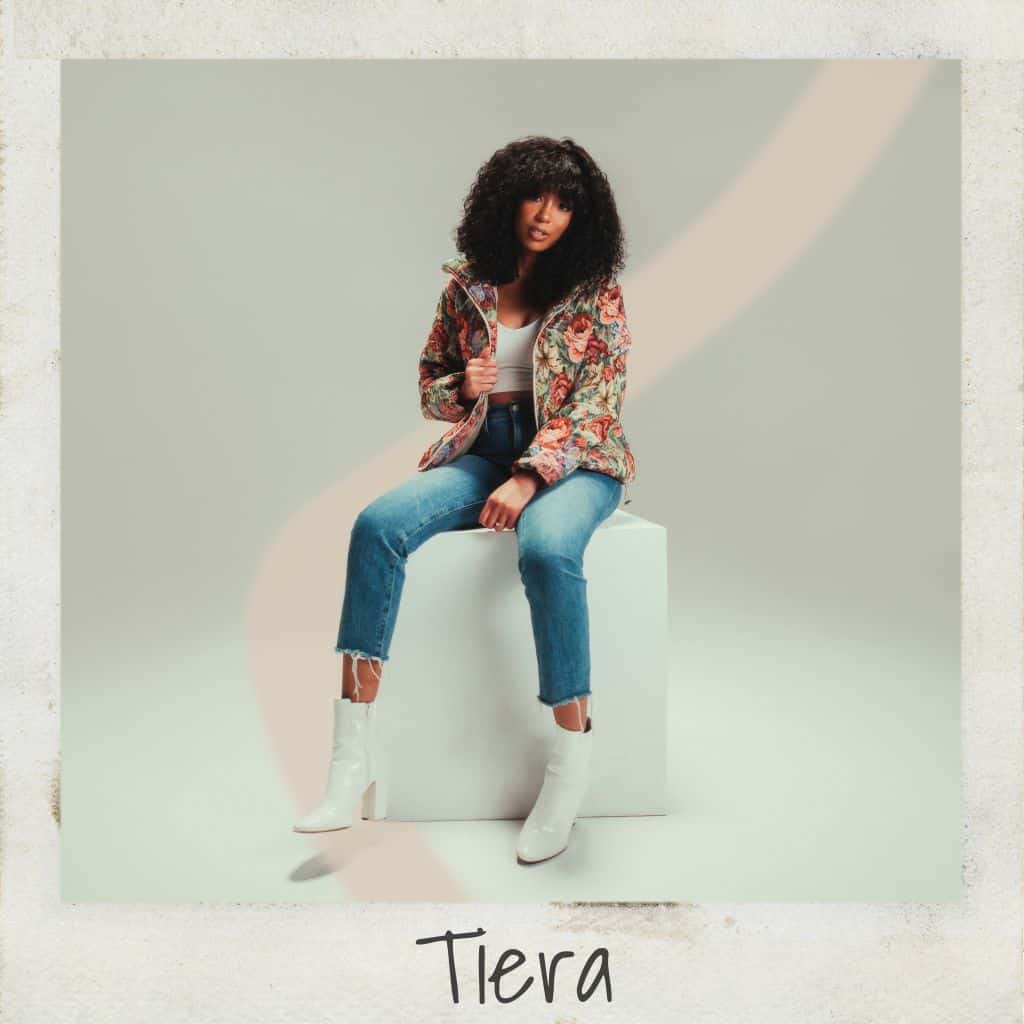 How did you begin a career in country music?

So, I’m from Birmingham, Alabama, and, honestly, I feel like I’ve just always loved music. I used to play around my hometown at talent shows, festivals, restaurants, and coffee shops. And, I did that for fun. But, I fell in love with country music and dove into it. I started taking trips back and forth from Alabama to Nashville with my parents, and my love of country music just grew from there. I started writing and learning what it takes to make it in country music and just started pursuing that professionally. But, I feel like it was just a natural progression because I’ve always loved music.

Did your parents support your decision to pursue a career in country music?

Oh my gosh, absolutely! So, I went to college for a year, and when we took those trips back and forth, everybody was always saying, ‘If you want to pursue country music, you have to be in Nashville.’ Eventually, my parents realized we would have to move up here for me to pursue country music. So that is what we did. I, my parents, and my two younger sisters packed our bags. And when we moved here, my family came to every one of my performances, and they still do. So I’m grateful to have their support because I know it’s not like that for everyone.

Do any of your family members sing or play an instrument?

So, my mom sings, but not professionally. And then everyone else is kind of all over the place in their passions. My parents are great at just letting us try out everything and work on our passions. One of my sisters is a makeup artist, and my older sister is a filmmaker. So we’ve got a lot of creativity in our family.

That sounds so fun! So, did anything about the music business surprise you when you moved to Nashville?

One thing I learned is that it takes time. I was not patient when I first started in the music business. I thought I would move to Nashville, and it would just happen for me as it did for Taylor Swift. I think we all knew that story of her going around to different shows and playing, and it just seemed like it was an overnight success, even though I know it was not. But it took me a second to realize that because I was expecting to sign a publishing deal or a record deal right when I moved to Nashville. But I am grateful it took time for all of that to happen because I feel like I’ve learned so much about myself. Also, I feel like my music is way better now than when I first moved to Nashville.

Speaking of music, you dropped your self-titled debut EP last month. Congratulations! Can you tell me about that project?

It’s been a while since I’ve released a new EP, so I am excited to have this music out! Three of the songs on there are singles that I previously released, and the last two songs are new releases. One of the new songs is called ‘Laid Back.’ It’s one of those songs where I knew I’d want to release it immediately after hearing it because it is a feel-good song that you would turn on on a Sunday. It’s just good vibes all around!

Another song on the EP is called “Not Your Girl.” That is one that I pondered on for a little bit. At the beginning of my career, I wanted to establish who I would be as an artist, what my brand would look like, and how my music would sound. I didn’t want anybody to tell me what that was because I wanted it to be authentic. So that’s basically what that song is about, and I feel like it’s the perfect song to be on that record.

Did you write all the songs on the EP?

I did! During my first few years in town, I tried to write as much as I could to figure out my lane and how I wanted to sound as an artist. I’ve been putting my head down and writing most of the time that I’ve been here. And I needed to be able to have input in all of these songs because I wanted my introduction to people to be 100% me, so I’m excited about that!

You teamed with Platinum Singer-Songwriter BRELAND on the track, “Miles.” Can you tell our readers about that song?

Yes. I wrote “Miles” with Cameron Bedell and Jared Scott, two of my favorite co-writers ever. When we wrote it, my producer, Cameron, added in a rap part because we felt like it would be cool to have a male voice on it. I immediately knew that Breland would be perfect on that song. So, I texted him and sent him the song. I was like, ‘I’d love to have you on this song!’ And, I’m not great with rejection, so I was like, ‘If you don’t want to do it, that’s fine. I just wanted to ask.’ And, he was all here for it! He actually wrote his verse for it, and I’m happy with how it turned out. I’m excited to have him on the songs. It’s a straight-up love song, which is my jam because I recently got engaged, so I’m very much in that vein!

Congratulations on your engagement. Have you delved into wedding planning yet?

I just dove back into the wedding planning. We both always wanted a fall wedding, so we are getting married in October here in Nashville. A Lot of our family is in Birmingham, but it is so pretty here, so we decided to have it in Nashville. Our wedding is going to be simple, and I found a venue that I love! We do not have to do much to it. I am also very minimalistic, so we do not have to do too much planning. But, we did get a lot of our planning done at the beginning of quarantine because we were off from music, and I got to focus on that for a little bit. But it has been great! I refuse to be one of those brides stressed out with planning, so we’re going to get this together and get organized because I’m going to want to have fun!

Who do you turn to for inspiration when it comes to music?

When I moved to Nashville, I was trying to figure out how to write my music. So I looked up to a lot of the songwriters here. Whenever I found a song that I loved, I would dig into the songwriter credits and that writer’s music. So, Nicolle Galyon, Hillary Lindsey, and Liz Rose, all of those incredible female songwriters, inspire me. When I first started, I also looked up to artists like Carly Pearce, who was up and coming. I dove into their music and was trying to figure out how I could do it for myself.

Speaking of Nicolle Galyon, you signed as the flagship songwriter for her publishing house. How has that experience been for you so far?

It’s been unreal! I mean, I never would have thought that I’d get to sign onto a company with her, let alone be her first writer! It is the best of both worlds because not only is she my publisher, but she is also a songwriter herself, and she knows the ins and outs of the music business. It’s been great to go to her for advice on songs or how to navigate music in general. She is the best!

What’s the best advice you received from Nicolle so far?

I think she talks a lot about me just being myself and trusting my gut, listening to the people that have been in this town and know the ins and outs of the business and how to handle things but also trusting that I know what’s best for my music. I think that’s the best advice she’s given me.

Along with music, you also host a radio show on Apple Music Country. Can you tell me about that?

Yea! It was never on my bucket list to be a radio show host, so it was unexpected. But it’s been nice to have something to focus on while we are waiting to play shows again. I love to focus on up-and-coming artists on the show because I am one myself. There is so much good music out there that people have not heard yet. So, it’s been great to have those artists on the show and interview them about their music. It’s been a fun time!

What’s next for you?

Honestly, I’m just planning to keep releasing more music. I’ve just been writing so much music that I’m proud of!