Dolly Parton returned to the stage for her first full concert since her 2016 Pure & Simple Tour to raise funds and awareness for breast cancer during the inaugural Kiss Breast Cancer Goodbye: Susan G. Komen Foundation benefit concert and event on Sunday, October 24.

Held at the 776-seat CMA Theater in the Country Music Hall of Fame and Museum in Downtown Nashville, the show was a once-in-a-lifetime experience as Parton brought her catalog of hits and her spirited personality to life in an intimate setting.

Taking the stage with her signature smile and a rhinestone-pink outfit, Parton was greeted with a standing ovation as concert-goers welcomed her with a roaring applause.

Seated on a pink barstool next to her longtime friend and musical director, Grammy nominee Kent Wells, Parton greeted the crowd and admitted she had butterflies in her stomach ahead of the show.

“I have not done a show in such a long time that I woke up this morning and thought I had a sore throat,” the East Tennessee native said. “You know how you get when you get scared.”

Parton treated fans to the ultimate Dolly experience that included never-before-told stories, performances of fan-favorite hits and deep cuts, as well as comical banter that allowed her inner comedian to shine.

“We’re not going to be dancing any jigs tonight, We’re just going to do our thing,” Parton joked.

As the show began, a fan from the balcony shouted “I love you Dolly,” prompting the “9 to 5” singer to shout “I told you to wait in the truck!” The audience exploded with laughter. She continued to acknowledge the audience all night long.

Throughout the show, the beloved entertainer captivated fans with her songs and stories, leaving the audience hanging on to every word. There were no distractions, not one person on their phones, no one leaving the room for drinks or bathroom breaks as all eyes were on Dolly.

After performing “Pink,” an uplifting breast cancer anthem that she recorded with Monica, Jordin Sparks, Rita Wilson and Sara Evans, Parton shared the live debut of “When Life is Good Again,” a song she wrote with Wells in 2020.

A true storyteller, Parton intertwined her life stories with her songs, sharing personal memories of growing up in the Smoky Mountains and recollections of her family.

After sharing a story about her grandfather and his involvement with the Pentecostal church, Parton shared a bone-chilling performance of “Precious Memories.”

She went on to tell the beloved story of her “Coat Of Many Colors” and share fond memories of her mother before singing a rendition of “Appalachian Memories,” a song she wrote about the time her father left their mountain home to work in the big city. When he returned, he vowed to never leave again.

After sharing a performance of “Puppy Love,” the first song she ever wrote and recorded, Parton had fans clapping along to the sassy chart-topper, “Dumb Blonde.”

The 10-time Grammy winner continued to reminisce on pivotal moments of her career, including her time on The Porter Wagoner Show and their very first duet, “The Last Thing On My Mind.”

She went on to perform career-defining hits like “Jolene,” “I Will Always Love You” and “Here You Come Again” as she shared the stories behind the songs.

Remembering her longtime friend and duet partner, Kenny Rogers, Parton sang “Islands in the Stream” with Wells filling in for Rogers.

Before closing the show with “9 to 5,” Parton revealed that she is teaming back up with her 9 to 5 cast mates Jane Fonda and Lily Tomlin for an episode of the Netflix series Grace and Frankie.

At 75 years young, the Country Music Hall of Fame member still has that “it” factor, and it’s no wonder she’s one of the most well-loved celebrities around the world. Those who had the opportunity to attend Sunday’s event will likely never forget the experience they shared with the one and only Dolly Parton.

Prior to the show, VIP guests participated in a silent auction to raise additional funds for the organization. Before Parton took the stage, former American Idol contestant Matthew Rogers hosted a live auction that raised hundreds of thousands of dollars. The final event total has yet to be revealed. 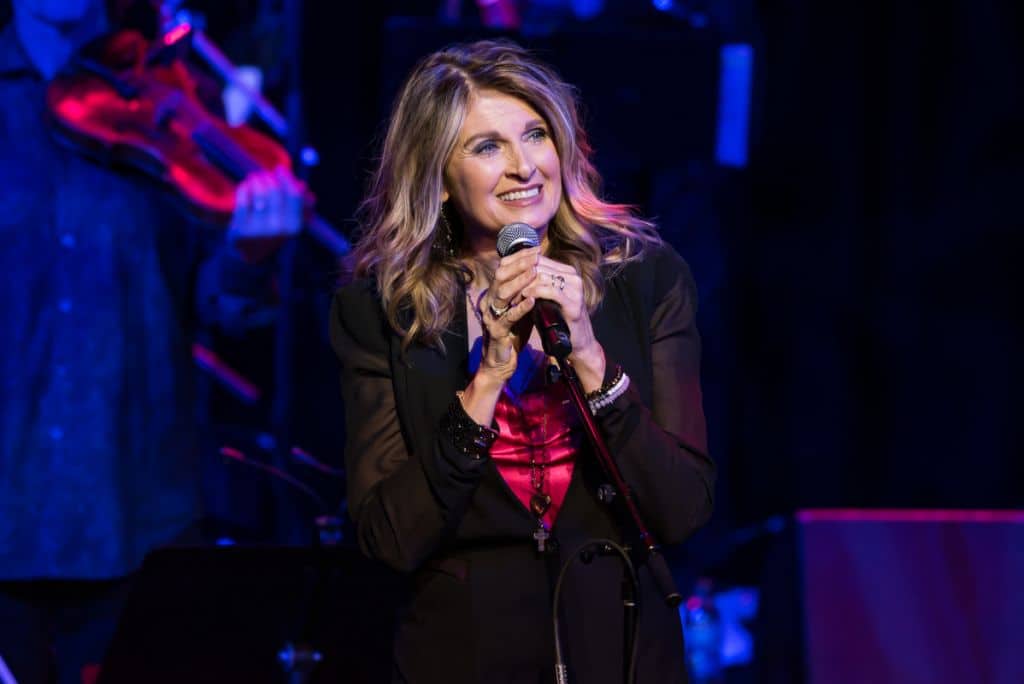