Her rendition of the iconic track with McGraw was so good, it caught the superstar’s attention.

To Booth’s surprise, McGraw responded to her Tik Tok with a fist bump emoji, in which the Nashville newcomer and American Idol alum commented back, “OMG ARE YOU KIDDING.” 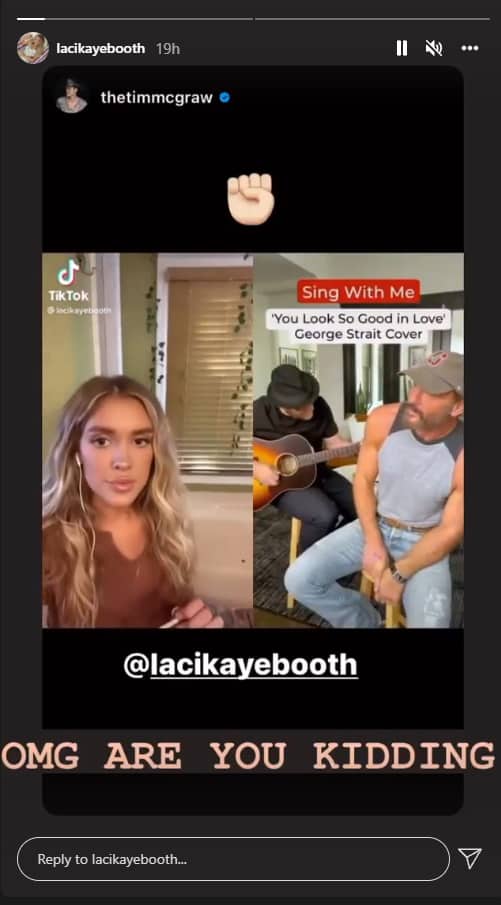 Written by Glen Ballard, Rory Bourke and Kerry Chater, “You Look So Good In Love” was released by country music legend George Strait as the lead single for his hit album, Right or Wrong, in September of 1983.

The track follows a narrator who is watching his ex-lover fall for a new man. As he watches how happy the true love she has now found makes her, he reflects on the fact that maybe they just weren’t meant to be. Booth and McGraw encompassed the story perfectly, giving listeners chills with their collaborative cover.

Booth has continued to move towards the forefront of the country music scene with the drop of her self-titled debut EP released in early August. Booth couldn’t be more grateful for the opportunity to share her music with fans.

“My whole life, I prayed, and I wished for this to happen. I prayed for it every night, and every time I’d blow out my candles on my birthday cake, I’d wish for it,” Booth shard with Music Row. “In my heart of hearts, this is exactly what I always wanted.”

McGraw has been working on an exciting new project the past few months, as he is set to star in the upcoming Yellowstone origin series, 1883, alongside his wife, Faith Hill.