An extended look at Tim McGraw and Faith Hill in the Yellowstone prequel, 1883, has finally been revealed!

The just-released clip showcases the beloved country couple in character as James and Margaret Dutton as they navigate through their journey across the Great Plains to seek land in Montana.

One scene gives an intimate look at McGraw and Hill in character as they share a private moment in the bathtub together. The real-life and on-screen couple share a kiss and embrace each other sans clothes. 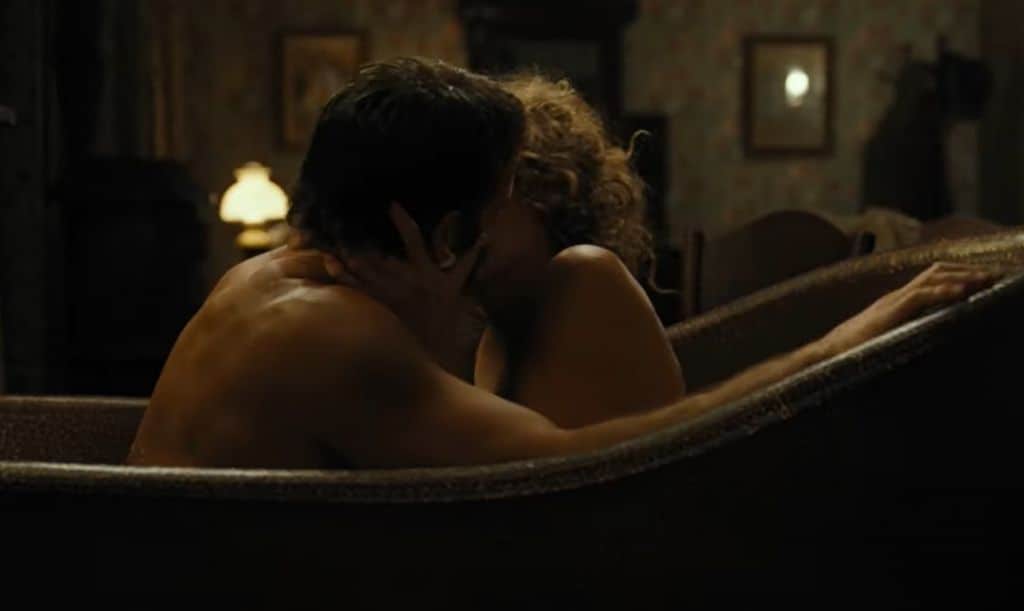 The clip also features cowboy character Shea Brennan (Sam Elliot) getting cozy with an unnamed character, teasing a potential romance between the pair.

The teaser serves as an extended look at the original trailer and features narration from Elsa Dutton (Isabel May).

“I heard a thousand stories, but none could describe this place, it must be witnessed to be understood, and yet I’ve seen it and understand it even less than before I first cast eyes on this place,” she says as the clip opens. “There were two journeys, one was filled with danger and death and despair. The other, adventure and wonder.”

As the trailer continues, the narrator goes on to say, “We weren’t poor, we weren’t desperate, the road west is filled with failures… It was a dream, and the dream was coming true, We are the land of no mercy now.”

Watch the just-released new clip below.

McGraw and Hill recently opened up about their experience filming the highly-anticipated show in an interview with Entertainment Weekly.

During the interview, McGraw recalled the harsh conditions that he encountered while filming.

“It’s super dusty and super hot,” he said. “There’s no way around it. At the same time, it’s like every kid’s fantasy to do something like this, to put your chaps on, your cowboy hat, and your gun holsters every day. Then you get on a horse and try to survive this journey.”

The country hitmaker and “7500 OBO” singer then gushed over seeing his fearless wife in character.

“To see my beautiful wife on horseback, firing guns, and having dirt all over her face, I just sit in awe,” McGraw gushed. “She’s a strong woman, anyway. Taylor said early on to me, ‘Man, you’ll just get on that horse. You’re not scared of anything.’ I said, ‘I’m scared of one thing. She’s right over there.’”

While McGraw did endure some tough, dusty conditions while filming, he wasn’t faced with the same challenges that his wife, Hill, was faced with, including the challenge of wearing a corset while horseback riding.

“Although it looks amazing, it’s terrible. I think I have a few ribs floating around in my body,” Hill admitted. “This is real work. I was raised by Edna Earl and Ted Perry, and they believed the best way to teach a child was to get your hands in the dirt. That’s basically this in a nutshell. I think so many actors are drawn to Taylor’s writing because he is portraying the story in a way that was lived. I gained so much respect for cowboys.”

The GRAMMY award-winning pair of superstars and their cast mates filmed the show in what was described as the “middle of nowhere,” which Hill admitted is “why so many actors are drawn to Taylor Sheridan’s writing because he is portraying the story in a way that was lived”

Hill later added that she was ultimately forced to become “quite comfortable” with the rest of the crew on set while filming as they had to adapt to living life in the middle of nowhere.

“You learn how to pick a tree, squat down, and do your business,” she said.

Earlier this year, the couple shared their excitement of joining the cast.

“Finally the day has come when I get to share some exciting news with you!” Hill excitedly shared. “I will be playing Margaret Dutton, the original matriarch of the Dutton family in the Yellowstone prequel 1883. Just wait, you have never seen anything like this!”