The reigning CMA Entertainer Of The Year announced the exciting news on Friday morning (Nov. 12) via social media with a video clip filmed inside the Denver Broncos’ Stadium in Colorado. The stadium which will also host the first date of his just-announced Stadium tour.

During the just over 2-minute video, Combs shared, “Hey guys, Luke Combs here, and I’m excited to announce that 2022 is going to be bigger than ever. We’re doing three stadium shows. So, that more of you guys can come out and see us. We’re bringing along a few friends of mine Cody Johnson, Zach Bryan and Morgan Wade.”

After a brief message from Combs, he welcomed tour mates Johnson, Bryan and Wade, who went on to share covers of each other’s hit songs. The country hitmaker and North Carolina native then enlisted a few of his friends from the NFL to unveil the tour dates.

“These three folks are super incredible, I can’t wait for y’all to hear them,” Combs said. “And now to tell you guys where we’re coming, I’m enlisted a few of my buddies.”

Ryan then revealed, “Atlanta, get ready, Luke’s coming to Mercedes-Benz Stadium on July 30.”

“This is going to be super awesome,” Combs admitted before telling how and when to get tickets. 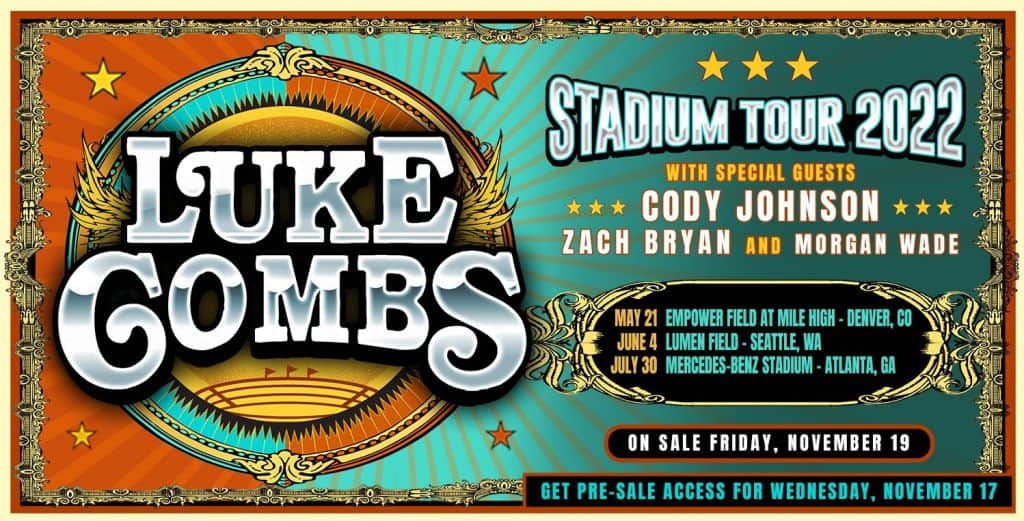 Tickets for the newly confirmed shows will be available for pre-sale starting next Wednesday, November 17 at 4:00 p.m. local time through Ticketmaster Verified Fan, with general on-sale following Friday, November 19 at 10:00 a.m. local time.

The news comes just two days after Combs was crowned CMA Entertainer Of The Year. That same night Combs debuted a brand-new song called “Doin’ This,” and teased a stadium tour in the music video, watch HERE.