It’s been a long and slow — but ultimately rewarding — climb up the country radio charts for Travis Denning’s newest single, “After a Few.” The week of May 9, the song hit No. 5 on Billboard Country Airplay chart, after a whopping 60 weeks of simmering its way up the Top 40.

“After a Few’s” chart trajectory actually broke a record, surpassing Jimmie Allen’s “Make Me Want To,” which hit No. 1 in March after a 59-week climb. Denning’s song hasn’t reached the top spot — at least, not yet — but the singer says he recently conferred with his fellow slow-and-steady riser about the perks of a longer climb up the chart.

“I texted Jimmie the other day and I was like, ‘Man, we’re just a couple of slow burners, brother,’” chuckles Denning in a recent conversation with Country Now. “He said, ‘Look, man, I’ve learned that the longer it’s on, the more people hear it and the more people start to love it.’”

There’s nothing wrong with taking your time to get somewhere. That’s a lesson that Denning has learned first-hand in other aspects of his career, too. His debut EP, Beer’s Better Cold, dropped on Friday, May 15, over two years after he released his first charting single, “David Ashley Parker From Powder Springs.” But he didn’t rush into putting together a longer project after that song gave him his first taste of success, opting instead to focus on his live show and trace his artistic evolution on a song-by-song basis.

Enter his next and current radio single, “After a Few,” a song that presented a more rock-driven, guitar-forward side of Denning than fans heard in “David Ashley Parker.” But the singer’s been living with both singles for a long time, he points out: In fact, they were both recorded around the same time.

“The first time I recorded music, it’ll be three years ago this July, and three of those songs that I recorded in that first batch of songs was ‘After a Few,’ ‘David Ashley Parker’ and ‘Heartbeat of a Small Town,’” he remembers. “And it’s interesting to see that those songs have stood that growth, over those three years.”

Of course, other songs have fallen by the wayside since then, as part of the natural process of Denning getting to know himself better as an artist.

“There were some other songs in the mix that I’ve grown past, and I’m at a point now where I feel pretty balanced. And really just understanding what I want to sing about and what I want to talk about.” 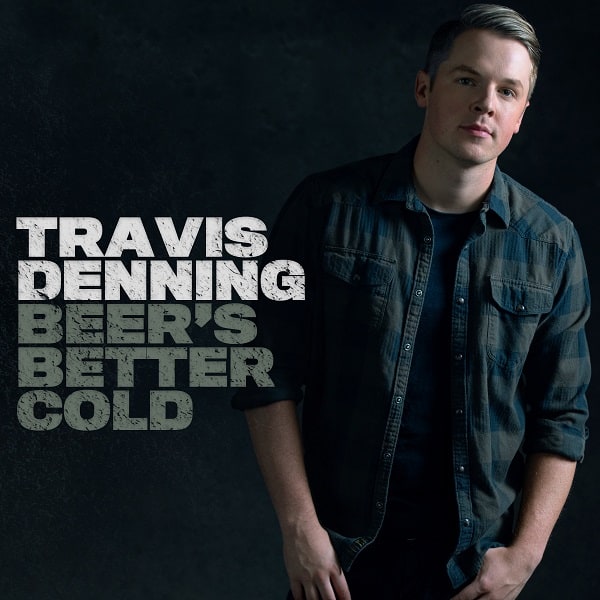 It was only once he got to that settled place as an artist, where he had a solid vision of what he wanted to say in his music, that Denning began thinking about putting together a longer project. Now, Beer’s Better Cold is a six-track reflection of that vision.

“Where I’m at in my life right now is a pretty damn good place. I’m enjoying being out on the road. Well — obviously not right now,” he says, nodding to the current COVID-19 pandemic that’s preventing artists from touring. “But I’m super pumped at seeing this stuff move, and I kinda wanna reflect that happiness. It’s a lot of up-beat, high-energy songs, you know? Some party songs. There’s definitely a heartbreak song on there, because it wouldn’t be country music without one, but I really think it’s a good reflection of where I come from and where I’m at right now.”

The title track, “Beer’s Better Cold,” sums up that sentiment particularly well to Denning. “A lot of people have been going, ‘How many songs are you gonna put out about beer, man?’” he jokes.

“But if you listen to it, you know that the song’s not about beer. It’s about all the obvious things in life, good and bad. [In the case of the song specifically], it’s unfortunately that a relationship is over, and you just gotta read the writing on the wall,” he continues. “I wanted that to be the title of the EP because the hook of that song just kind of comes out of left field and surprises you.”

That’s a common thread that runs through Beer’s Better Cold: Both in terms of subject matter and musical style, Denning hopes his project will catch listeners off guard.

“For people hearing all these songs for the first time, I hope their expectation gets a little taken out of left field,” he relates. “I hope they come away from it going, ‘You know, I was expecting to hear ‘After a Few’ six times in a row, but I didn’t. I heard this other side of him, and I’m excited to hear more about it.’”

Fans hoping to hear a softer side of Denning’s songwriting will find it in “Sittin’ by a Fire,” the project’s sixth and final track. As the singer says, he’s put out a lot of songs about drinking and good times, but this is the first he’s released about saying “no” to a party, in order to tend to a new relationship he’s got blossoming at home.

“I don’t know if there’s any reason why I’ve never put a love song out [before ‘Sittin’ by a Fire’]” he reflects. “I think it’s just like I said — [it’s part of] growing, finding who you are as a writer, what you wanna talk about. I realized that I do wanna sing some stuff like that.”

Denning hints that his first love song probably won’t be his last. Including “Sittin’ by a Fire” as the last track on the project was an intentional decision, one that he hopes will set listeners up for new music still to come.

“There is more of that coming,” he adds. “So it was kind of cool to leave that [song] as the last little sentence of this chapter.”