Blake Shelton returned to the stage for the first show of the year over the weekend in Choctaw, OK at the Choctaw Casinos & Resorts and welcomed a very special guest during his performance of “God’s Country:” a 6-year-old boy named Wyatt, who is currently awaiting a heart transplant.

Wyatt is one of Blake Shelton‘s biggest little fans and caught the attention of thousands on social media after his mother shared a heartwarming video showing the moment she told him that a stranger paid for his tickets to see Shelton in concert.

“We just got the news that a very nice man who heard about how much Wyatt loves Blake Shelton has paid for his ticket to see him live!! He’s so excited!! I don’t know this man but thank you so much!!” Wyatt’s mom shared on Facebook.

The excitement didn’t stop there. At the concert, Wyatt caught the attention of Shelton with a homemade sign, and the country superstar invited him on stage.

“Your smallest, biggest fan from Lake Texoma, 6 years old waiting on a heart transplant,” Shelton said as he read the sign aloud from the stage.

“Think y’all are having a bad day, put that into perspective right there, man,” he added ad he kneeled next to the brave little boy.

“The next note he has on here, he asks if he can sing this song with me,” he said as his band began to play “God’s Country.”

With his hands in his pockets, Wyatt stood next to Shelton as they sang the song together, joined by thousands of fans who watched on from the audience. 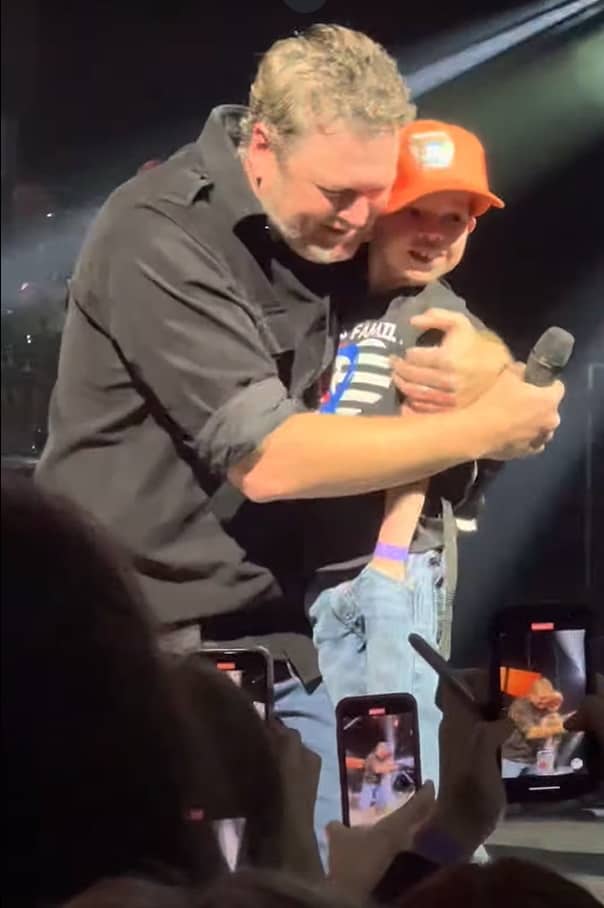 Before Wyatt returned to his seat, Shelton gave him a hug and made sure he safely left the stage.

The incredible moment was one Wyatt won’t soon forget.

“He was just walking on cloud 9 like he was the coolest kid there!” Wyatt’s mom, Hayley McKee, told Music Mayhem following the concert.

She later shared video of their impromptu duet and showed her gratitude toward Shelton for making it happen.

“I don’t know if Blake Shelton will ever see this, but I just want to let him know he is awesome and officially my favorite person. He absolutely made Wyatt’s day thank you so much to him and everyone who stopped us to tell him how great he was on stage and told him they are praying for him!! Definitely a night to remember,” she wrote.

McKee shared more about Wyatt’s condition with Music Mayhem, revealing that he was born with a condition called Hypoplastic left heart syndrome.

Since his birth, Wyatt has undergone several open heart surgeries and shared that he has been added to a transplant list. He now takes a  “new medication that requires him to have a long-term IV in his arm and a backpack with medicine that runs continuously.”