If you’ve walked along Nashville’s Lower Broadway, chances are you’ve noticed a slew of bars and restaurants owned by some…

If you’ve walked along Nashville’s Lower Broadway, chances are you’ve noticed a slew of bars and restaurants owned by some of the hottest stars in country music. Luke Bryan’s 32 Bridge Food + Drink, Florida Georgia Line’s FGL House, Dierks Bentley’s Whiskey Row, and Blake Shelton’s Ole Red Bar & Restaurant are just some of the venues to put a stamp on the downtown destination over the last few years.

Thus far, no opening date has been announced for Casa Rosa, but fans can expect to walk into the doors sometime in the summer of 2021. In the meantime, Country Now has gathered a few details about the future establishment that fans will be sure to love. 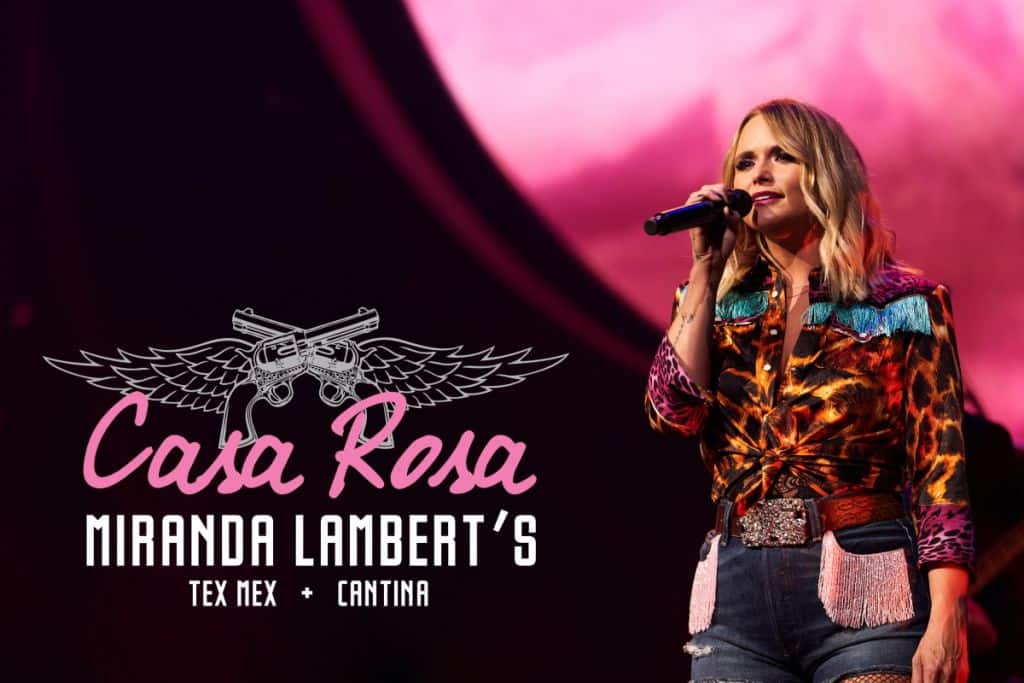 Here are five things we know so far about Miranda Lambert’s Casa Rosa.

History in the making

That’s right! Lambert will make history as the first woman in country music to ever take part in owning a bar and restaurant on the famous Nashville honky-tonk strip. Perhaps her new venture will inspire other females to follow suit!

Lambert has been working on the menu details with chef Tomasz Wosiak, VP of Culinary Development at TC Restaurant Group. Casa Rosa guests can expect a taste of Texas in the state of Tennessee. Not only will they get to choose from a variety of Tex-Mex inspired dishes, but they will also have plenty of drinks to choose from thanks to the bar’s “extensive” margarita and tequila menu. People eating inside the facility will also enjoy their food in style since Lambert chose to include comfy, tufted pink booths for an ultimate dining experience!

Cuisine aside, Casa Rosa is set to be a four-level entertainment complex. Three of those levels will feature live music from some amazing bands! Beyond that, patrons can get a skyline view atop the rooftop bar, which overlooks all that Nashville’s nightlife has to offer.

The Casa Rosa will include a room dedicated to Lambert’s career dubbed the “Pink House.” Inside, fans can admire some of the singer’s most prized memorabilia, including the birdcage from her No. 1 song, “Bluebird,” recognizable costumes previously used in her music video shoots, a rhinestone horse saddle modeled after one of Lambert’s favorites that hangs inside Billy Bob’s in Fort Worth, Texas, and more.

Lambert made sure to add plenty of her personality into the Casa Rosa design. Not only did she make sure to add some girly touches inside the entertainment complex, but her personality shines throughout – all the way down to the company’s logo. The Casa Rosa’s logo features a design identical to the tattoo on Lambert’s left forearm – a pair of wings with guns.