The five-song set serves as part two of the duo’s three-part full-length album and was entirely co-written by Maddie Marlow and Taylor Dye. It follows the duo’s One Heart To Another EP, which was released in early 2019.

Produced by Jimmy Robbins and Derek Wells, Everywhere I’m Goin’ is a solid collection of songs from top to bottom that showcases Maddie & Tae’s growth as artists and songwriters.

Highlights from the set include the breakup anthem “Bathroom Floor” and “Lay Here With Me,” a stunning duet with superstar Dierks Bentley.

We recently caught up with the duo to talk all things Everywhere I’m Goin’ and learned quite a bit about the project in the process. 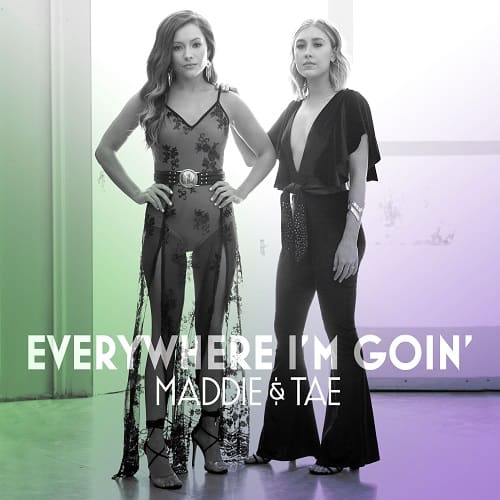 1. They were initially opposed to releasing the album in three parts.

“Well, at first, I was like, ‘I want to put out an album, I want to do it the traditional way,'” Marlow said. “And then, with how many songs we needed to tell this whole story, we thought, you know what? Those songs aren’t going to get the love and attention [on one full record]. And so, we just thought it would be cool to break it up into three different parts.”

2. They were REALLY nervous to ask Dierks Bentley to collaborate with them.

Admitting she “screwed this up,” Marlow went on to share the story of how the phone call to Bentley went down.

“We went in the studio to go record with our producers. I think we were trying to get five songs done in a day,” she recalled. “We started on ‘Lay Here with Me’ and I was like, “Oh, my gosh. How are we going to ask Dierks? Maybe I’ll call him tomorrow.’ Even though we toured with him for a year and we still are really close to him, it’s still just like, he’s one of our favorite artists, so it’s nerve-wracking to ask someone to do that.”

Dye said they wanted to have “all their ducks in a row” and write down “bullet points” of everything they needed to say. That plan went out the window when Marlow decided to dial Bentley’s number later that night to make sure he hadn’t changed it. It rang once and she hung up.

“When I was a kid, you could call and it would ring one time and they wouldn’t get the call. I guess iPhones don’t do that,” she laughed.

The following day, they were back in the studio when Marlow received a call from Bentley.

I’m like, “No! Oh my gosh, the call went through and I don’t know what I’m going to say!” I was looking at Tae and I was like, ‘I can’t not answer it.’ Oh my gosh. I was so panicked,” she admitted.

Things ended up working out. After hearing the song, Bentley agreed to sing on it with them.

3. They recorded hundreds of songs for this project.

Making this album was a labor of love. While they don’t know the exact number of songs they wrote, they know it was quite a few.

“Hundreds for sure, but I don’t know how many for this record specifically. It was over a course of two or three years,” Dye explained.

4. The EP is very personal.

Maddie & Tae held nothing back when writing for this record, even though being open and honest is a bit uncomfortable at times.

“I think it’s tough because with what we do, fans expect that of us, and I love that because I don’t want, either one of us, we don’t want to put out a record and say, ‘Oh, this is Maddie and Tae the business/professional side but you’ll never get to know the real us.’ That’s no way to live,” Dye insisted.

Marlow agreed, adding, “We don’t listen to records that do that.”

5. “Bathroom Floor” was inspired by a wild night in Jamaica.

After writing an emotional song that had them in tears, Maddie & Tae wanted to switch things up a bit so they started working off the title “Bathroom Floor.”

“After the tears dried, I was like, ‘We need to write something that can pick you up after this.’ And we started messing around with the idea of ‘Bathroom Floor,'” Marlow explained.

“And we’re like, this kind of rings true because we had a really big night in Jamaica,” Dye shared with a laugh.

“Josh [Kerr] kind of started playing that feel, that groove where it just kind of drives the whole time,” Marlow continued. “And so we’re like, ‘This isn’t a sad song!’ We kind of treated it like, what would be the song after ‘Die From a Broken Heart?’ After you’re so heartbroken, what do you need? And then we’re like, ‘Well, that’s kind of what we need.’ We just kind of wrote it based off of our drunken evening in Jamaica.”