Luke Bryan just surprised fans with the announcement of a new album and 2020 tour.

The superstar revealed the news Thursday in a surprise Facebook Live video where he also took the time to perform a few songs.

While he didn’t divulge too many details about his new album, he did reveal that his next project will be titled Born Here, Live Here, Die Here and that it will be released April 24. The album will include Bryan’s hit singles, “What She Wants Tonight” and “Knockin’ Boots.”

As thousands of fans watched, the Georgia native also shared details about his Proud To Be Right Here Tour, which kicks off May 28 in Cincinnati, Ohio. The summer run will feature special guests Morgan Wallen, who will provide direct support, as well as Runaway June and Caylee Hammack, who will each appear in the opening slot on select dates of the tour.

“‘Proud to be right here’ is a phrase from my new album’s title track, ‘Born Here, Live Here, Die Here’ (written by Jameson Rodgers, Josh Thompson, Jake Mitchell),” the two-time ACM and CMA Entertainer of the Year shared in a statement. “From the moment I first heard it, I loved that this song related so closely to how I grew up and how I still have so many ties to my hometown. It’s a connection I feel is so important in country music. I am truly so thankful to have the opportunity to make music for my fans and to look out into the crowds each night from stage and be proud of what we’ve created. And I’m excited to get on the road with these guest artists too. I’ve been watching what Morgan is building with his fans and it has been so fun to watch! I know with him, Caylee and Runaway June on this tour it’s going to be such a high energy night for everyone.” 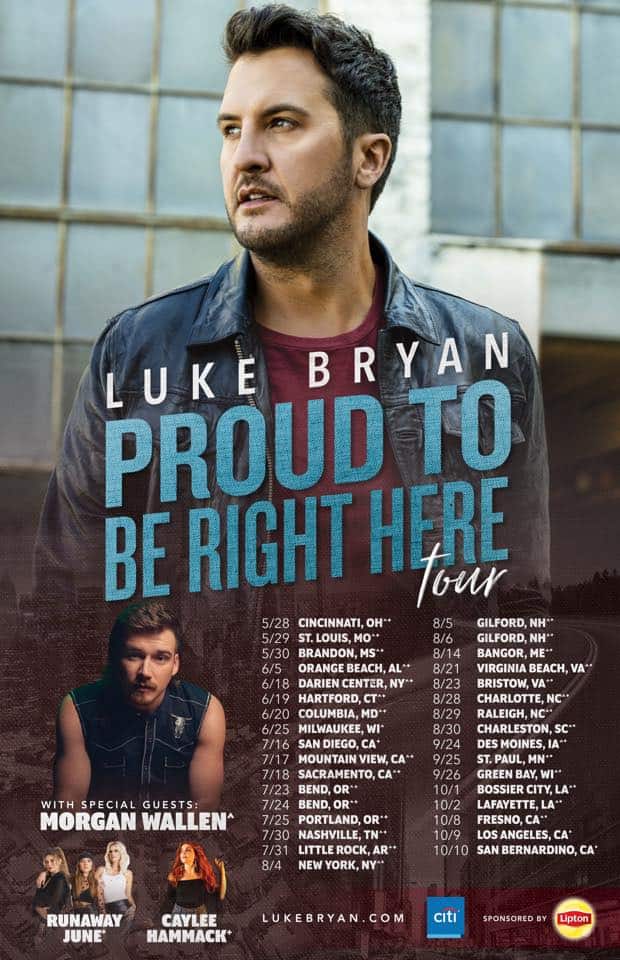 The Proud To Be Right Here Tour kicks off May 28 in Cincinnati, Ohio. The summer run will also include a “few stadiums,” in which Bryan teased will include some special surprises.

Fans can stay tuned to Bryan’s website for details.

Prior to the release of his new album, Bryan will return to American Idol as a judge alongside Lionel Richie and Katy Perry. The new season of the hit show will premiere February 16 on ABC.