It’s March of 2021, and Justin Moore is chatting with Country Now over Zoom, sitting at his podcasting desk at…

It’s March of 2021, and Justin Moore is chatting with Country Now over Zoom, sitting at his podcasting desk at home in Arkansas. That’s where he’s spent the bulk of his time over the past year: At home with his family, working on projects remotely and learning to navigate a new routine for all the time he usually spends on tour.

It was also right around this time last year that he decided to cut his newest single, “We Didn’t Have Much,” a nostalgic ode to finding simple joy during lean times.

“We found it right around the time all this hit, a year ago almost to the day,” Moore recounts. “And I would’ve recorded that song regardless of the pandemic, but it was really fitting, in some ways. You know, back at the beginning of this whole thing, before anybody really knew anything about it, we were forced to lead a much more simplistic life, for sure. Being home. Literally borrowing eggs from my parents, who live 500, 600 yards away. I really thought that song spoke — and still does — to the beauty of that simplicity.”

“We Didn’t Have Much” is among the songs on a new, eight-track project called Straight Outta the Country, which Moore announced on Thursday (March 25) during an episode of his The Justin Moore Podcast. But while Moore may have cut the single during the pandemic, that song was actually a “late-comer” to a batch of work that was cut around the same as the songs on his last record, 2019’s Late Nights and Longnecks.

“From the perspective of the songs themselves — the whole project, it’s basically an extension of the last album,” Moore says. “Which I claimed, and still stand by this claim, was my most traditional country album to date.”

So while the project’s themes are rooted in loving home and coming from the country, that’s less a result of recent events and more a continuation of a lifestyle that’s always been important to the singer. That’s why he selected one of its songs, “Straight Outta the Country,” to be the title track: “I live in the country. I’m straight outta the country,” the singer observes with a laugh.

Both thematically and in terms of the songs themselves, Straight Outta the Country is, in many ways, a companion project to Late Nights and Longnecks. As an example, Moore points to one of the songs on the new album’s track list, “More Than Me.” It’s a song he wrote for his daughters, and follows Late Nights and Longnecks’ “That’s My Boy,” which focuses on being a dad to his son.

“I had wrote a song for my son, and so the pressure was on to write one for my girls,” Moore laughs. “I was having a conversation with my oldest daughter, who’s now 11, so this was maybe a couple of years ago. She was talking about one of her friends in school who was having trouble with her boyfriend, and I’m like, ‘You’re nine! Are you kidding me?!’

“So I said, ‘Look, one day you’re gonna find love, get married or whatever,’” the singer goes on to say. “‘But ain’t nobody ever gonna love you more than I do.’ That’s kind of where the song came from.” 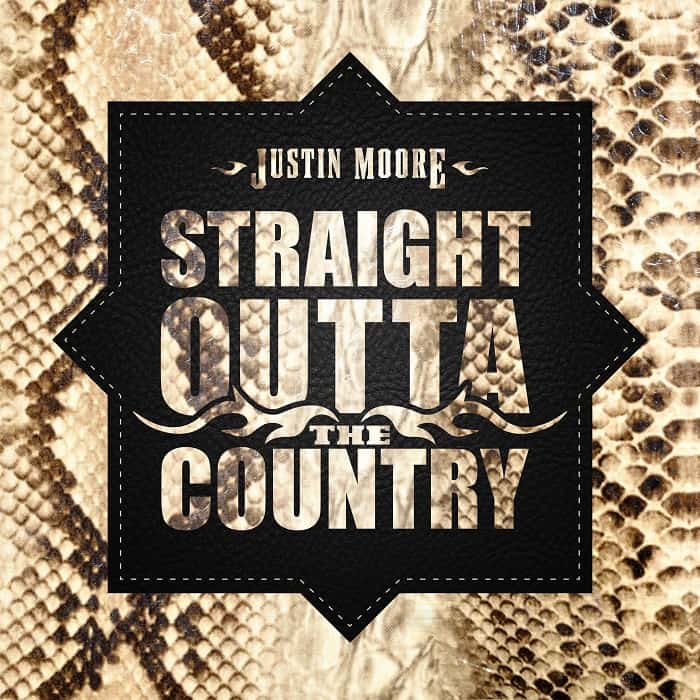 The premise was a basic one, but that didn’t mean it was an easy song to write. “It would seemingly be easier to write really simple songs, but it’s actually more difficult,” Moore notes. “And I’m so proud of it. The cool thing for me is, certainly, I tell my kids every day how much I love them, but for them to have this, long after I’m gone, or ‘That’s My Boy’ — it’s pretty neat, because the music’ll live forever.”

Considering the connection between Late Nights and Longnecks and Straight Outta the Country, it’s fitting that Moore will make his return to the stage with the same person who was with him when he left it: Tracy Lawrence, who was touring with Moore when the pandemic brought live music to a halt and the two artists had to halt their live show plans.

Moore is returning to the road this spring, including a co-headlining show with Lawrence in North Dakota for health care workers.

“Selfishly, I’m a huge Tracy Lawrence fan. I just adore him. To have the chance to go make up some of these dates [with him] is great,” Moore adds. “And one of the shows we have coming up is gonna be really special because it’s all frontline health care workers, so that’ll be really, really cool. Not only to be onstage, but to have the chance to give back a little bit, to people who have been putting their lives in danger to help people through this. It’s gonna be pretty neat.”

In the meantime, Straight Outta the Country is due out on April 23. On Friday (March 26) he’ll share one of the new songs off the project, “She Ain’t Mine No More.”